We visited two or three old villages as well as Old Nice on my recent visit to the south of France so that I don’t recall which one this street was in!  Nor did I take notes – the ambience was too restful for that.  (I’ll have to do better on my next holiday.)

The light is streaming down the street so most of the buildings are in shadow or glancing sunshine and the people are back lit.  It’s quite complicated at first sight but “Hazel’s dictum”works in this scene, too. 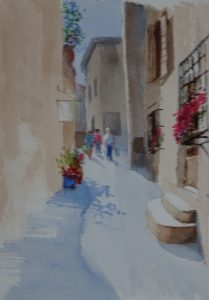 I began by dropping in the sky then a light wash of Burnt Umber on all the buildings.  This colour is less red than Burnt Sienna and serves well as the creamy stone in indirect sun.  The full sun is only on the top of the steps and on the heads and shoulders of the people.  When the wash was nearly dry I deepened the tone on the surfaces directly facing me, finally giving them a light wash of Ultramarine Blue  after  they had dried.  Now I had the buildings marching up the street and could begin on the detail.

Starting on the right,  I put in the tones and colours I could see, not many from this angle, finishing off with the window grill.  Advancing up the wall, I indicated the shadows cast by the open shutter and the deep tone of the window recess.  Downstairs had more flowers and a grill.  The next building shows its face only as a thin slither of light, framed by the shadowed  walls.  How effective that slither is! Just imagine the painting without it.  A roof line and vague window shapes dressed the further building, and we have arrived at the people walking over the crest of a little hill.  These are very simply indicated using colours already in the painting, and I’ve missed the highlights on two of them so a little opaque white will be called for at the end.   (I use Designer’s Gouache for that and it wanders if you work on top of it).

The building at the back of the street is actually on the downward slope of the road, the top of its heavy door helping to thrust the figures forward.  There is a huge terracotta pot on a high wall next, its greenery largely silhouetted against the sky.  The wall it’s standing on disappears behind another terracotta pot at ground level.

By working the detail starting from a fixed spot  (it doesn’t have to be the side) extra brush strokes “grow” the painting.  This is an encouraging way  to paint as the picture develops under your eye, and concentration on one area helps you to observe more.

2 thoughts on “An old street”