It’s been a very strange year, and next year is in the lap of God.  But we can take time to contemplate the Christmas story and rejoice in the friendly people who rallied round the tired couple –  the innkeeper, the shepherds, and no doubt other travellers – a bit like the friendly people all around us this year, too.

It wasn’t raining heavily on our final day, but a thick mist blanketed the landscape, and we had to paint indoors. 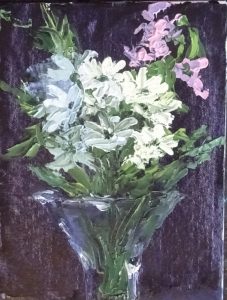 First we painted flowers in a glass vase.    You can’t see it but my flowers were too small at first.  This is easy to correct using a palette knife so my variable drawing skills are not too intrusive.  This is a good tool for both flowers and vase, as well as mountains.

Then I was back in my comfort zone, painting indoors from photos! and it shows! 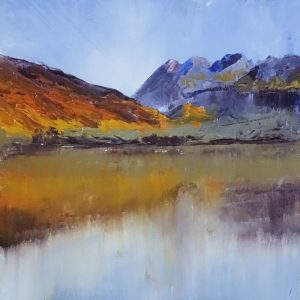 These views are taken from postcards, so I needed to reduce the intense blue of the skies.  Photographers like the mirror image in the lake, but I don’t, so I have blurred it;  I created the mirror image, then swept the flat of the knife down from the water’s edge.  By using the flat rather than the edge, most of the applied paint remained on the canvas.  (I’d used the edge to scrap off disasters many times). 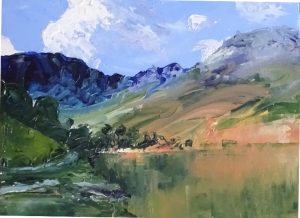 This one pleased me. I’d worked out how to use the direction of stroke with suitably applied tone and colour to give the distant slopes sweep and varied vegetation.  Inside, colour mixing  returned to normal – very strange. 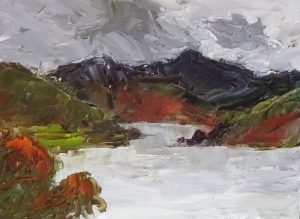 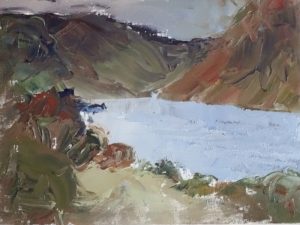 Believe it or not, these two are more or less the same view of Crummock Water!    The little bay in painting one just wouldn’t come in painting two – trouble with the palette knife again.  This time I wasn’t cold or wet as I was wearing four layers underneath a waterproof.  Thus there was only the wind across the lake to contend with as well as the palette knife.  We were quite high above the lake and I was a little  nearer the lake in the second one.  The clouds have action but the form is strange.  The colours of the foreground again eluded me, but I was beginning to come to terms with the ever changing light, especially the tonal difference of sky and lake.  I still don’t understand why the colour mixes were so elusive.  The provided palette for the week was Ultramarine Blue, Cobalt, Cerulean Blue, Alizarin Crimson, Cadmium Red. Lemon Yellow, Cadmium Yellow and White, none of which are strange or new to me,  and while I missed my Burnt Sienna, it wasn’t crucial, especially for the greens.    The palette itself was white, but so was the canvas. so the mystery lives on. 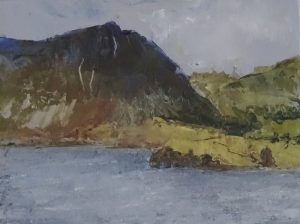 The knife was beginning to be more controllable, the sweep of hills and mountains being easier to express with a single stroke.  I’m rather pleased with this mountain.  There is a sense of it sweeping down to the lake, with scree slopes, and wooded valleys.  But that wretched promontory, (another right-hander) just wouldn’t go right.

One of the advantages of a demonstration painting taken over two or three weeks is that the enforced separation of painting periods allows for quiet contemplation of progress or its opposite.

I was able to see the square tree mentioned last time but also how little grace my tree had compared with the original.  There were also some things to insert,  like the railings, useful to break up some areas and to send back even brightly lit ones. 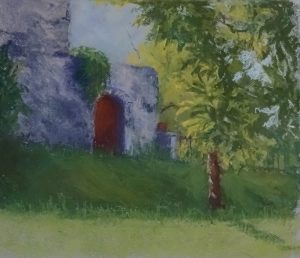 The grassy area had been started with a bluey green which was at variance with  all the other greens in the painting.  As I wanted, by this time to cover the paper well, I pushed some warmer greens in on top of the blue, the two blending to give a warm dark.  The line between the shadow and sunlight on the grass was too definite.  Again, very thin wavy lines suggesting long seed stalks softened it.

Strong patches of dark greens, strategically  placed, began the bending of the tree.  These had leaf like marks both on them and falling from the edge, giving variety of shape and contrast.

I was a bit unhappy about the line of sunlight straight across the page so I inserted a fictional plant.  I think it makes for a better composition. 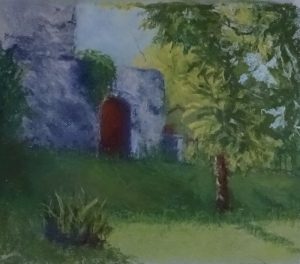 I agree that this introduces a diagonal, but this one has a purpose, and is blocked by the bush so that the eye is directed into the painting.  Similarly, the shadow of the trunk also directs the eye towards the door.  The original diagonal in the photo did no more than cut off the right hand  corner of the picture.