This is an attempt to start painting again by  studying of observational skills, and I think it’s working.  I got the idea of doing this from Hazel Soan’s latest book, “Light and Shade in Watercolour”.  It’s the very first exercise she suggests.

I’ve painted this window before and was not impressed with the result, but this one is going better – not completed yet, but promising. 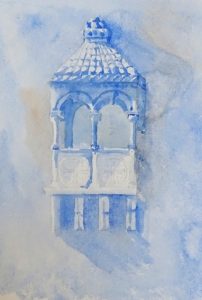 I’m using Cobalt and Burnt Sienna on A3 Kahdi paper, so it’s quite big.  The intention is to give room to develop the various tones, and concentrating on the relationship of the tones has taken my mind away from whatever was spooking me.  In fact, I’m rather pleased with it,  but I’m even more pleased that I am keen to finish it.

There were far more children there today than I expected mid-week, but I had forgotten about school parties.  It made seeing  the more popular animals rather  a more crowded experience.

I had taken a few pastels this time to see if it made capturing movement easier.  Certainly, whole body shapes were done in moments.  Thinking about it in the quiet of the evening, the matter of scale is important – using pastels, I should have attempted bigger shapes, easily possible, and also easier to add form and some detail.    My best attempts were a 3 minute elephant and  a two minute buffalo.  Taken as animal sketches, they were just about adequate, but I would have been happier with a larger 10 to 15 minute effort.  So size in relation to medium was lesson number one today.

From about 3.30 pm onwards, as the school trips and families went home to tea, the Zoo became quieter and the animals showed themselves more readily.  Rhinos stood proud on top of the hill, 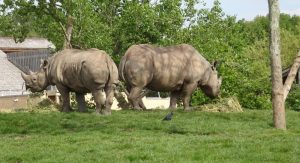 an elegant crane paraded along the fence,

and the red panda had a good scratch. 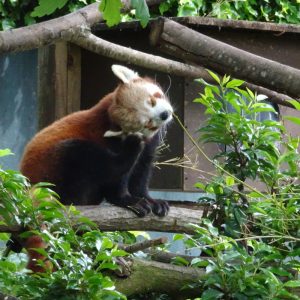 Since I have a season ticket, my plan is to drop in about 3 pm occasionally and try for a larger, more careful drawing.

We certainly had a good day for it! – sunny, with a slight breeze, so it was pleasant to be outside for the group’s first attempt at painting and drawing in the open air.

There was plenty to see, and all kinds of intricate machinery, pleasing buildings and boats, of course.   The site is extensive, so the group soon dispersed to find that certain thing to get them going.  I drew a series of interlocking roofs  with reasonable success, then I decided on some lock gates.  There are plenty of them to choose from, but like the lions at the Zoo, no sooner had I started to draw, when they moved, not of their own volition, just a narrow boat wanting to use them. 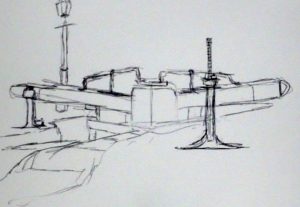 The angles are all important, and difficult to get right, but the other thing about canals and canal boats is the sheer length of pieces.  Those huge timbers  are twice as long as I’ve drawn them, though I am quite pleased with the angles.

Finding a comfortable painting position took time.  I found standing free to paint impossible, too many things to hold at the correct angle (those pesky angles again), but those huge timbers made a good table. 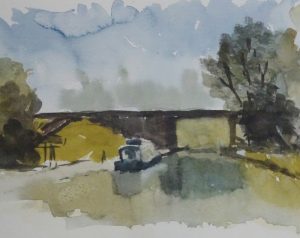 I was able to make a stab at the canal bridge –  again the boats moved as soon as I was settled!  The painting “reads”, the colours rather subdued considering the bright sunshine. Most of my painting to date has, of necessity, been indoors where it is possible to use which ever technique works best for the image you are painting.  The fast drying conditions needed extra thought – why this was a surprise, I don’t know – if the chosen method was going to be effective.  I had to really slosh the water on to achieve “wet-in-wet” so the page of my sketch book curved, (memo to self – take a painting block next time) but it dried fast so wet on dry became immediately possible.

It was an interesting and educational day!

Have you ever tried to finish a painting from a photograph, that you started live?  Most of my paintings to date have been from photographs, partly from necessity, and partly, (as I have recently discovered) from a lack of faith in my drawing abilities, so I haven’t needed to cope with this.  It hadn’t occurred to me that the transition required a new set of skills.

In using a photograph, I found the background, even though I wasn’t using it,  confused the flower shapes in a way I hadn’t noticed when painting from life.  This doesn’t happen when I start with a photo, probably because I have already mentally  simplified the image at the outset.  Then, there was the colour change.  I “know” my printer produces blued images, but as I rarely use the photo as more than an initial sketch,  I was not awake to the change.  My first attempts to complete the painting were more pink than the initial work.

If at first you don’t succeed …. 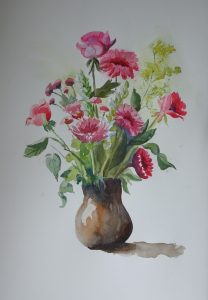 and I can’t claim this as success.  How wooden and solid the additions seem!  There is none of the airy, “leap of the page” lightness about them.  There is a lesson here if I can only fathom it.

Well, no.  The sleepy ones were sunk into indeterminate woolly heaps, with no visible arms, legs or head.  I think they had been taking lessons from the hedgehogs.  The lions didn’t, of course.  I came upon the pride stretched out on a sandy patch quite near the fence blinking in the sun, or in his case stretched out on his side.  I set to, but the minute I put pen to paper, he opened one eye, yawned, stood up and flopped down again.  Whether he was irritated by all the people watching him, or  genuinely had an itch, I don’t know but he never settled after that and his ladies were no better.

One of the giraffes was steadily patrolling the side of his house, but I had barely drawn the head and neck, when he went indoors, and all his family with him.  The elephants were shy too.   The onagers were more co-operative, and I managed one or two sketches of them.  There is a theory that you can use other members of a herd to complete a sketch, but these fellows had no knowledge of that.  Nonetheless, I enjoyed the afternoon battle.

The upshot of all this is that I will be taking my watercolours next time – yes, there is going to be a next time – as one brushstroke can say more than half a dozen lines, so I may be more successful.