I’m on Cloud nine!  I have just completed the preliminary drawing for my new, rather complicated, demonstration watercolour – freehand! – and it looks accurate, and the quality of the line delights me.  When I started sketching at least once a week with my students, I never thought that I would achieve this skill level so quickly.   At least, it feels quick.  I think it’s taken eighteen months, but when I remember that most of my life has been weighed down with a fear of drawing, with the conviction that I can’t draw, that is the blink of an eye.  Now to add the paint.

I started with the sky as usual, painting loosely rather than a formal wash, and taking it down over the roofs.  That avoids a sharp edge where the sky meets the roof and seems to add positively to the general atmosphere. 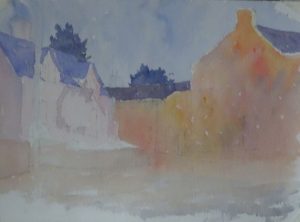 I introduced the pink cottage, created the roof and trees in a darker shade of the sky colour, allowing the roof to bleed into the pink cottage on the shady side.  Then I introduced some of the colours one sees in bricks into the wash of the more distant building.  Individual bricks would be time-consuming, and rather boring, and counter-productive at this distance.  But the varied colours and tones are a delight.  Again, I avoided a hard edge where the building meets the pavement. I’ve painted over the windows which are largely darker than the walls, hoping to lift the paint for the white areas.  It won’t matter if some of the paint remains there (I hope!) as a stark white would be too eye-catching.

2 thoughts on “Farndon in Watercolour”