This is a rather hilarious attempt at the Cathedral.  There is no way that a person with my lack of patience with fiddly detail is going to do justice to this building.   You will remember when I was discussing the Belem Tower window  that I was wrestling with the “decoration on decoration” that is the norm for this period of Portuguese  history.  The Cathedral takes this style into overdrive.  But I liked the monochrome simplicity of the colour enough to give it a go. 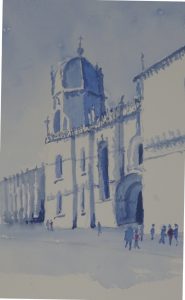 I used Ultramarine Blue for the sky, the added Indigo to the mix to tone it down a bit.  Bearing in mind Hazel’s dictum ” shape first, detail later”,  I gave form to the dome, windows and door, and the returns in the wall.  I had fun trying to leave out the white flying buttresses in front of the dome and the attached ones on the distant building; and there were the decorative spikes on top of the walls.    Then it was a case of entering as much detail as I could before my patience ran out!

The few people give scale to the building.  I gave one or two of them red coats to spice up the blue.

One thought on “Belem Cathedral”