This second pass has started to suggest the details in the painting.  The sky has lost some of its energy, but perhaps it was too dominating to be a secondary player in the scene.  I used a slightly smaller brush to calm it down, not changing the tones and colours just repeating some of them with smaller strokes. 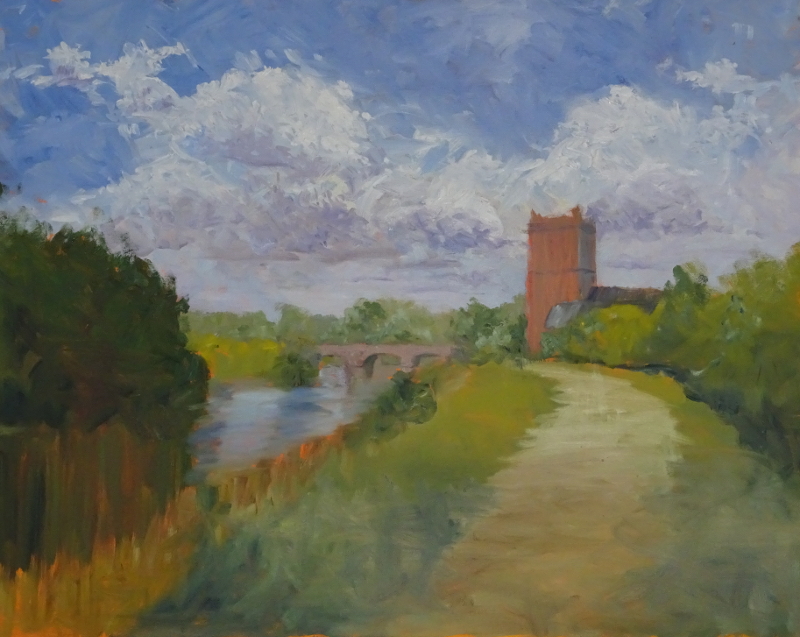 Turning my attention to the trees beyond the bridge, I sought to differentiate them from each other.  After all, they are just beyond, not in the far distance.  Again, I didn’t want them to dominate, just to be there.  Natural progression then led me to the bridge itself.  Here big changes have be made.  I was looking for a good basic colour and tone for the red sandstone used in its construction, (there is yellow sandstone in there too, but that colour  is easier to find).  Red is a misnomer – it’s more brown than red – so I started with Burnt Sienna and added a touch of Alizarin and a touch of Raw Sienna.  Alizarin is fierce.  I usually tell my students to show the brush where the Alizarin is on the palette, and that is as close as you should get.  An exaggeration , true, but not far from the truth even so.  A small addition of white and we have success.  A tiny sweep of dark on the underside of the arch, and behold! the bridge appears.  Isn’t painting wonderful.  I have done a little bit on the church tower, given the church itself a roof and played with the adjacent bushes.

This second pass is when painting becomes the relaxing pastime the uninitiated think it is.  The first pass laid out the structure of the painting, so now I consult my reference photo less and less, and engage with the painting in front of me more and more.  I can stand back, using my arm and shoulder, holding the long handle of the brush near the end, gradually  developing my initial  inspiration.  It puts me in a happy place.  I know that somewhere in the painting will be a knotty problem that will have me in thrall – there always is –  but right now all is serene.

One thought on “Bangor Bridge 2”