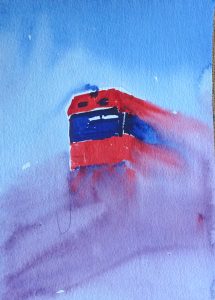 This is altogether a brighter image.  It’s the usual shot of the front and side of the engine, referred to by railway photographers as a “three quarter wedge”.    I’m using paints fairly new to me, Quinacridone Red and Indanthrene Blue.  These are carbon colours, transparent, making a beautiful purple when mixed together.

This time I started with the Engine itself, free hand, straight in with the paint.  I wanted the image to be crisp, rising out of the blur of ground, under carriage and sky.  Then I sloshed in the sky allowing it to blend with the red as it came towards the ground,  thought “this isn’t going well!”, left it to dry and found the watercolour elves had been at it.  It has possibilities, after all.

It looks too much like a bus but the vestiges of an undercarriage will help.  Neither colour alone will give a very dark tone, but the two mixed together at their most intense are blissful. 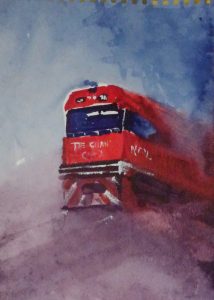 Working on the dry surface, I tried vigorous strokes of intense blue alone, and mixed with red to give energy to the motion of the train, and completed details of the nose to express the immense height of the beast.

The drawing is not up to scratch but there is some sense of the train arriving at speed.  Certainly I have a painting, not a copy of a rather uninspiring photo but I still haven’t truly understood how to translate such a hard edged image into a painting I’d want to sign.  So I’m going to try a Koala next.

2 thoughts on “The Ghan”