It was time to bring the foreground to the same level of finish as the rest of the painting.  In my reference, the dry grass is well flattened but I was aiming for a wilder look.  Doing long wispy grass required some thought.  overdoing the individual fronds would look mannered, and great splodges would look, well, splodgy!

Overlays using different effects, tones and colours is the plan, and this is the first pass. 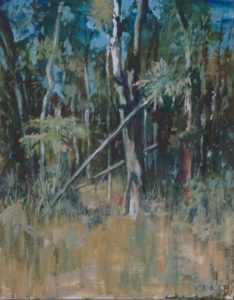 I began with a broad brush, using mid tones of grey green to add depth to the grasses, pulling the brush upwards, and lightening the weight of the stroke as it reached the tree line. Repeating this technique using mid tones of ochre, then paler tones of grey green and of ochre, has begun to suggest the standing grasses.  what you can’t see from this photo is the end of each stroke as the paint just catches the canvas threads as they cross over each other, and the lighter (in weight) use of the same technique among the trees.

I used the same colours and tones on the foreground foliage, and for the odd sparkle among the more dense forest.