We looked at how few colours were needed to make many other ones last week.  Now I want to build on that to work out how colour choice creates atmosphere.  This is my source.

Now, there are various resonances drawing me to paint this scene.   It’s a lookout place in Lisbon where people gathered to enjoy the Spring weather and the view over the river Tagus.  We first came upon it at dusk with a clear sky, and it reminded me of Alma-Tadema’s paintings, and of the scene in Kenneth Branaugh’s “Much Ado” when the soldiers, returning triumphant at dusk, strip off and plunge into pools that were surrounded by marble pillars.  But my camera failed me – or rather I failed it, as it’s a new one I don’t understand yet.  We returned a few days later in different weather conditions but I was sure a photo would help me revive the memory.

I planned a varied wash over the whole page, using  Indian Yellow and Permanent Rose,  to re-create the golden evening, then the figures and superstructure were laid in (dilute Ultramarine Blue).   These blue areas mark out those parts that I will continue to refine. 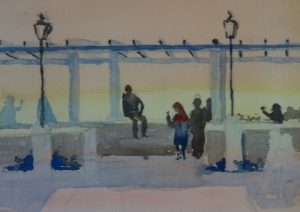 The figures are in strong silhouette.  Next,  I need to decide how dark the light areas in shadow should be in relation to the people.  As you can see, I have begun to make such judgements, though as yet no modelling is defined.  It’s early days, but the atmosphere is beginning to appear.  The image is too clear cut as yet,  – more thought about shade and deep shadow,  maybe a cloud or two?   If I  do more work on the painting this week …..

One thought on “Atmosphere”