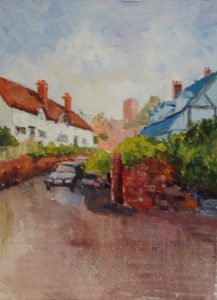 We are making progress! As you can see,  I have done some work on the white cottages on the left of the picture.  I’m still painting loosely, indicating rather than defining.   Some of the underpainting is showing through particularly near the guttering.  The roofs are tiled rather than slate, so that zing of red balances the warm tones on the wall under the timber framed cottage.  I put in the car – fortuitously it was there when I took my photographs – for I think it gives life and warmth to the painting.  It won’t be quite so “important” when I’ve finished, but, after all,  villages are lived in.  And I found a fence I hadn’t noticed.   All those diagonal lines should lead the eye to the church tower, but maybe the whiteness of the cottages enhanced by the red roofs can win the day.  We’ll see.

Now it was the turn of that tower and the building 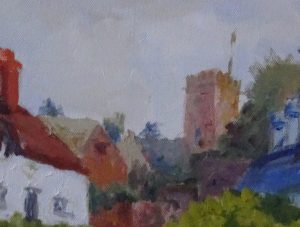 s in the background.  It makes a rather charming picture on its own!  I have used a small brush and added dabs of “near miss” colour to trees, houses and the tower, keeping the same tonal value.  This just breaks up the surface so adds interest without drawing huge attention to itself.  Only when someone stays to look more carefully will such detail be noticed, giving secret pleasure.  It’s a sort of reward  for stopping to look at my painting; and it’s reward to me for I take such pleasure myself in painting like this.

There’s lots more to do, about another 4 hours I reckon, so further progress will be slow but satisfying.

One thought on “Farndon Cottages 2”