This week I have worked on both current paintings, though one of them has been “current” for some time. 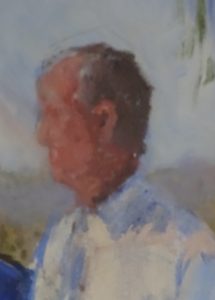 Having changed the pose of my figures in the oil painting, and liked the new atmosphere the changes have created, I made a start on the man’s head.  I have to say that it looks like him! and is exactly how I have wanted the figures to appear.  I said all along that I didn’t want to paint a portrait, but only a recognisable figure.  We can recognise people from a distance by the way they carry themselves, so detail is not necessary to create a likeness.  This is much easier to catch, too.

The pastel also is gaining shape and perspective.  I had intended to work on

the two trees just in from the right hand side, and did start there.   Inevitably the background was called into play for one shapes the other.  I seem to have lost the path which curves among the trees, but the blue-greens of Australia  are apparent.  The sunshine catching the right side of those trees will also illuminate the nearest tree on the left so that the path (when I find it again) and the shadows  will be balanced by the strong verticals of the sunlit trees.

One thought on “Small advances on two fronts”