Some years ago, I began this painting of a very dilapidated house.  All around it, the houses were pristine, elegant, expensive!  This relict of another time was in urgent need of assistance.  The case looked terminal, though television shows of buildings in a far worse state being reborn offer hope. 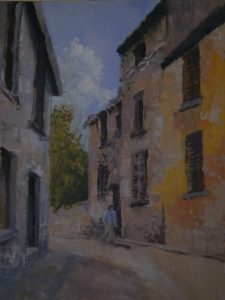 I was painting in oils.  I added buildings on the left to even up the view and enjoying myself with colour and brush-strokes.  Indeed, all was going well until circumstances interfered with my painting time.  When I came back to it,  I had forgotten my original intentions and couldn’t find my way back into the picture.  I hung it on the wall in my studio and largely ignored it.   Then, after my recent exhibition, I was reorganising the studio and my interest was rekindled.

Rather than dive straight in, I thought I would attempt it first in watercolour, taking the unaltered photo as my guide and limiting my palette to Prussian Blue, Raw Sienna and Burnt Sienna.  The mood is muted,  elegiac even.  The Photo has turned out rather dark . so none of this is clear!   I’ll try for a better one later. 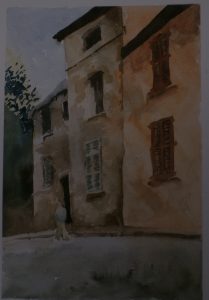 A broken wash of Raw Sienna with a tiny amount of Burnt Sienna in the mix gave me the building on the right, while the admixture  of a touch of Prussian Blue, dirtied it nicely for the invalid.  A splash of pale Prussian Blue on the old shutters and on the road completed this first phase.

When it was dry I added other broken splodges to suggest dilapidation before adding the darker details of windows, shutters and doors.  This one isn’t finished either, but I feel I know the view better and can make progress in both.  Result!

After last time’s poor effort, I decided to “play small” and attempt some detail on the figures.  I rather like them the way they are but they do need to be more detailed as they are the focus.  Maybe confining myself to a small area will increase my confidence again.  So faces and feet are my tasks for this session. 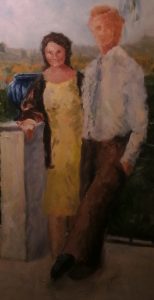 I don’t want to put her feet in till I have his leg right.  His left leg is too long (or his right leg is too short!) so I tackled that first.   I re-drew the leg, straightening it and shortening it, making more of the fall of the trousers.  It looked better so I ventured in with paint. The foot is rather balletic.  However, attempting to insert the other foot showed up my erratic drawing skills.  This foot is on the load-bearing leg but putting it centrally, in line with his chin so to speak, left the other foot floating.

Frustrated, I turned to her face and am reasonably content with the result 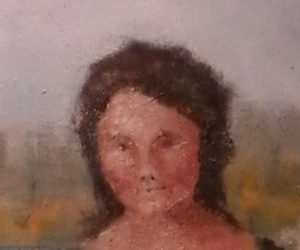 so far.   Tiny dabs of paint inch the face towards  likeness – not there yet, but enough done to enable me to work on the dress next time, then over to him again.  Could do with some serendipity but hard graft may bring it on!

This is a pretty torrid time for me – everything I try to paint turns out badly.  Watercolour, pastel, even my faithful oils, troup past me, one failure after another.  On the bright side – this has happened before.  I reach the stage when I almost decide to give up painting altogether.  But I have the memory of other times when everything goes brilliantly, when everything I touch is painting magic.  So I don’t give up….. yet.

I have just spent and hour and a half on “in the sunshine” and have washed out (with turps) most of what I have done.  It seemed to consist of wrong tones in the wrong place, poorly applied paint, light source undetermined, etc., etc..  Ugh!  About all I have achieved is the correction of the original drawing.  Still that’s better than no progress at all. 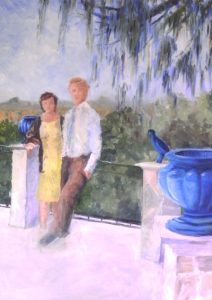 They do look more comfortable now that the posts have something substantial to rest on.  The bottom bar of the railings now shows up against the extended floor that has also provided that solidarity for the pillars.  Not a lot to show for an hour and a half ……