I’m rather pleased with this watercolour especially as I have not used the medium for a while.  But being able to paint more regularly at the moment has paid dividends.  For once, I’ve taken it slowly, working forward layer by layer using increased detail to enhance the perspective.  Watercolour can be such a quick medium that I sometimes feel that if the painting is not completed in half an hour or less, and at one sitting, then it isn’t a proper watercolour.  Where I picked up this misconception, I have no idea.

This painting is loose as well as detailed.  The cool blues and lemons of the distant hillside give way the the shadowed slope of the valley and the great shout of colour in the foreground.  The dark evergreens on either side are a good foil for the sunlit tree trunks.  I like the zigzag tracing the land forward through the scene.

Incidentally, the painting reads well even in monochrome, so the tonal values must be right! 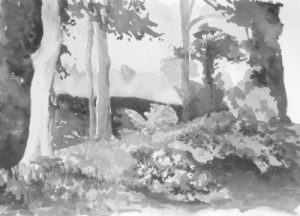 Well, here it is.  I am almost sure I have finished.  I will put it up in the studio for a week or two before I sign it in case something jumps out at me.  I have to say his eyes look very strange in the photo, but not in the painting itself.   A critique from a friend would be useful! However – there is always an however – I am dissatisfied that I couldn’t make more of it.  It’s OK as far as it goes, not without input from me, especially in the colour sense, but I would like to try again and make it less representational.  I think I will try mixed media, using “Collage, Colour and Texture in Painting” by Mike Bernard and Robin Capon, mentioned in my New Year post, as my guide.  I am hoping to make something with more atmosphere, more mystery, something less obvious.  This will not be a quick exercise as I will be well into personally uncharted territory.  Wish me luck!

I worked on her face first in more detail.  If you remember the mouth was very loosely indicated, her nose was twisted, and her hair was a rather dull brown, so plenty to do. 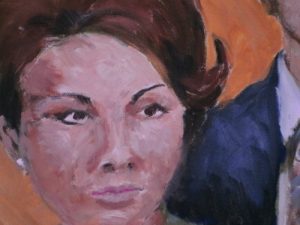 I think I’ve done reasonable well here – she looks altogether more human.   Although I have made corrections, I haven’t lost the vigour of the brush strokes, and have achieved more successful tones.  The upper lip is still too light, and I would like a more nuanced tonal balance around the eyes. ackled her hair which is more auburn than brown or red.  A touch of alizarin in the mix seemed to do the trick.  I know the hair is a bit dome-like, but that was how it was done in those days – I know, I had one too!  Even so the carefully sculpted side curl is too thick.  It needs to be more airy.

I turned to him – 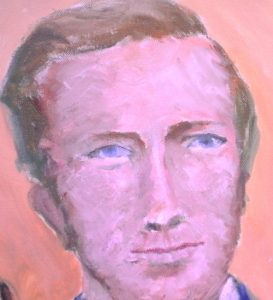 at least he now  has a nose and mouth, and they are believable.   His eyes are still too narrow and almond shaped. The modelling on the face is not that strange colour in actuality ( I haven’t worked out the vagaries of my camera yet).  Both faces are still rather flat, so I need to attend to the shading again.  Then there is the matter of making sure they both have space in the painting to be more than cardboard cutouts.  Still progress has been made.