I’ve returned to oils for this painting.  It’s a view of the Yarra upstream of Melbourne and is the type of scene I enjoy painting in oils. 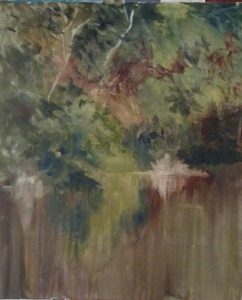 It never ceases to amaze me how much you can say with a  mishmash of colours and tones and stroke directions.  I do like to get the picture on the canvas as  soon as possible for after that,  you are only pulling out detail and refining strokes.  This took all of 15 minutes.    It is ” hold your breath and concentrate hard” sort of stuff.

The trees and bushes are laid in with scribbles of paint matching the tones in my source without worrying about what they represent, aiming for as much variation in colour as I can find, dark over light and vice versa.  When I arrived at the water line, brush strokes became strictly vertical, echoing the colours and tones above without being too pedantic about it.  Then the bright reeds and a couple of tree trunks were sketched in with a turpsy rag.  Reflections of the sky do strike across the water but that’s for a later date.

The secret is to be as loosely accurate (!) as you can with your tones.  You don’t have to be precise about the shapes of the tones, but they should be, broadly speaking, in the right place!

3 thoughts on “Back to oil painting”