The water makes such a difference, providing both context and contrast. 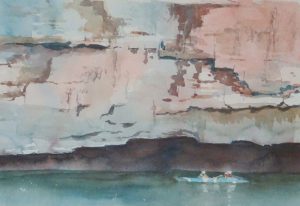 You can see the depth of the overhang and the scale of the cliff in comparison to the canoeists.  The overhang casts a very strong shadow, the counterchange with the cliff making it appear even stronger.  The water is in shadow too, the only relief there being the canoe itself.

The palette is very restricted, only Prussian Blue and Cadmium Red, their pale presence visible in the cliff face.  These two, mixed richly together give a vibrant black.  Dilute the mix and you get varying greys and browns.   The river was created by wetting the area, avoiding the canoe and people, then adding a strong Prussian Blue stroke where it meets the cliff.  The Prussian Blue bled into the watery glaze, lightening as it went.  Just before it dried, I ran strong Cadmium Red into the Strong Prussian Blue, that bled just enough to blacken the area under the cliff, but not advance into the lighter water.