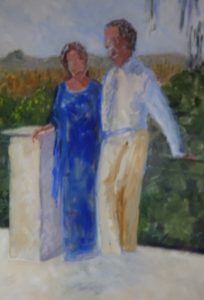 Using my sketch as a guide, I have altered the pose and the colouring of my pair. I think it already looks more relaxed and friendly.  The new colours are altering the balance of the painting, and I am preferring the new view.

His creamy trousers are lightening the tone, his outstretched arm opening up the pose, and when he gets his feet …..

Meanwhile, her choice of dress goes happily with the greens and blues of the foliage, but it played havoc with the turquoise vase at her elbow.  Now these vases are a source of joy to her, but when I took the reference photo, they were temporarily  not on display for safety during building work.  None of us thought about them!  What to do?

I could change the colour of her dress – but I liked what the present colour was doing to the painting.  I could change the colour of the vases though I don’t think that would go down too well.  In the end, I took the one behind her out of the painting altogether.  There is the large, very glossy vase and its attendant dove in the foreground which was sufficiently distant from her dress for an unhappiness to be avoided,  and she looks less crowded now that it has gone.

2 thoughts on “Progress “in the sunshine””