It’s all very well to try someone else’s technique, but apart from the fun one should explore it to see what, if anything, one can do with it from one’s own inspiration.  I loved the looseness of the style – the blending, swirling, bleeding,  thinning of the watercolour paint are integral to its magic.

I think in last week’s effort, I tried to define the picture too soon.  The straight line of the water’s edge was too definite, and since it crossed the page from edge to edge, was far too dominant.  The real dominance should be the brooding cloud and the bright sea.  Then again, the lighter hillside was in advance of the darker one, and while that is not necessarily a design fault, in this case, I think it is .  And finally. I think the Indigo needed a bit of warmth added. 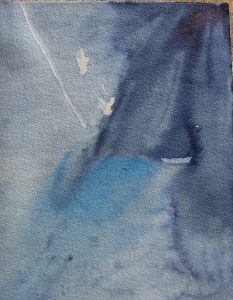 Taking that analysis as my starting point, I tried again.  Certainly, start with deep Indigo in the top corner, but instead of clean water  as my diluent I used Ultramarine Blue, again stopping the diagonal flow but allowing the darker Indigo to cross it.  Lots of water near the shore line,  then introduce Manganese Blue fairly strongly in the middle without defining that shore line for its full length.  It’s hard to resist the impulse to fiddle as you can see from the bottom of the painting!    But I feel this is an improvement on the last one.  It allows for the addition of a few details when the painting is completely dry. 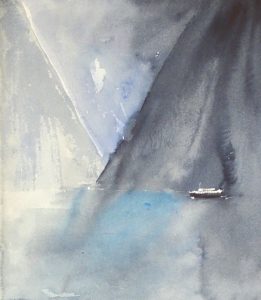 I think this is a reasonable result.  I introduced more Ultramarine Blue in the sky and put in the steamer.  I also defined the plunging mountain more carefully so that the lighter one does go behind it.  There is a very fine line defining the shore in front of the boat . The painting is not as dark as the first image suggests so I lightened the photo and this  has enhanced the image!  There’s a feeling of moving towards the light.

I’m going to explore further next week but I’m using one of my photos from Australia.  I’ll look for something less gloomy. 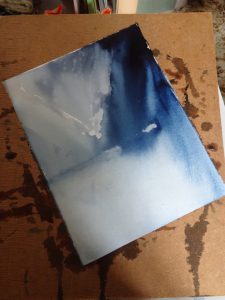 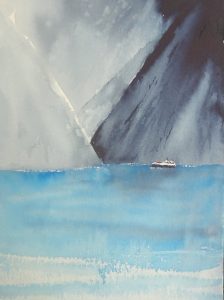 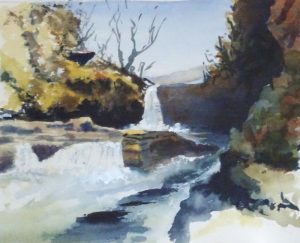 For the next three weeks I shall be attending an on line watercolour painting course on Zoom.  It’s always interesting to see how other artists tackle a subject and I wanted to get to know the teacher, or at least learn something about his methods, since I will be attending one of his courses in person soon.  That will be about “painting outside”, something I have very little experience of,  as circumstances have dictated that I work mainly from my own photographs.  It turns out that he paints very like I do, which means I only have to cope with “outside”!

Teaching via Zoom requires a different approach to face to face lessons. For one thing, he had 100 students from all over the world, some painting after a day’s work, and others up before breakfast.   Some were absolute  beginners while the rest had varying  painting skills.  With this  set up, the usual demo followed by personal advice as class members work at their own paintings would be impossible.  In the event, he painted a passage, then the students essayed the same (we were all working from the same photo). Then we proceeded to the next passage. 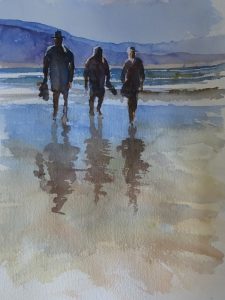 As you can see, it is a fairly simple image of three figures on a beach, backlit and with reflections on the watery shore.  We started with the sky and the distant hills, working through the sea onto the wet sand in the foreground strengthening the tones at the second pass.  The figures are virtually silhouettes, the light catching the shoulders thrown up by the darker background and the silhouetted shapes.  the reflections were placed on a damp surface.

The inevitable start-stop nature  of the lesson took some getting used to both for him and for me.  Working to someone else’s brief was a useful experience.  Next week we are painting a waterfall.