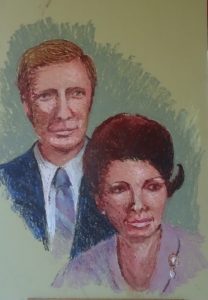 Since I had bought a portrait set of oil pastels, I thought I’d better try one (or two).  This is the second attempt to paint these two from two photos of them in their twenties before they even met.  The lighting on each was different, so some creative shading was required.  Having looked at both paintings, I’m sure this one is an improvement.  The overall colouring of the picture is more subtle, and the contouring of the faces is better.  He looks distinctly more human  – his head is such a weird shape in the oil painting.  I’ll show it here for comparison’s sake. 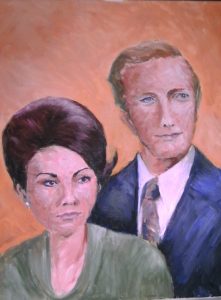 Putting him on the left has made for a better balance, and  the green background is less strident.  My observation of a face  shows improvement.   Both pictures were painted over several sessions.  I had a real problem with the need to remix tones in oil painting when returning to the canvas after a week, while the oil pastels didn’t change, but were waiting patiently for me when time allowed.  Incidently, the oil canvas now looks like this!

So, an improvement, but room of plenty more.  Even in the improved painting, the people are not vital, not alive.  More study required. But Hazel Soan is writing a book about portrait painting, and I have ordered Rob Wareing’s new book from saa!

One thought on “Oil Pastel Portraits”

This site uses Akismet to reduce spam. Learn how your comment data is processed.